After, he added between 20 and 30 worms. Dry leaves were also added. Black plastic removable panels kept the worms in a dark environment. 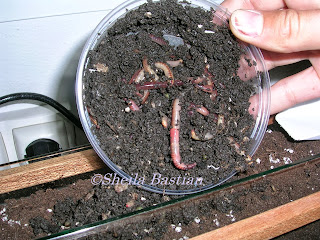 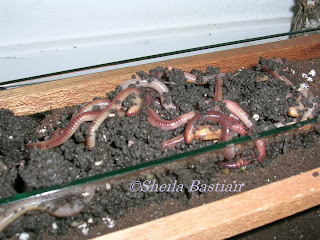 The purpose of his experiment was to see how worms burrow tunnels in the soil and aerate it. How they also mix and turn the soil like a plough, and also, to observe the underground behaviour and  movement of earthworms, which we can't see in normal conditions. After a couple of weeks we could see this:

For the science fair Victor made a model of an earthworm, with the help of Alejandro Baena, showing both internal and external features of these interesting invertebrates. 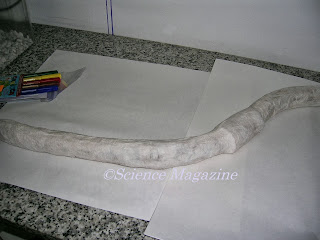 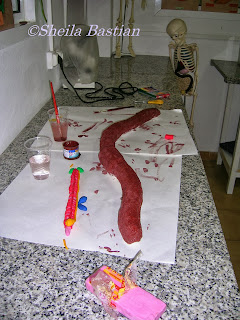 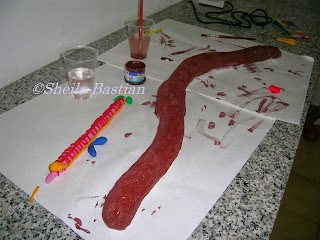 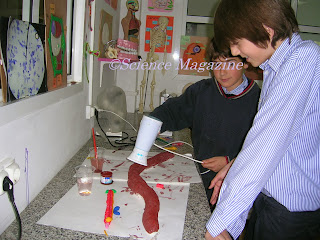 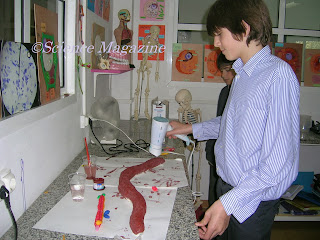 FAST FACTS
· The scientific name for the common earthworm is Lumbricus terrestris.
· Earthworms are invertebrates—they don't have an internal skeleton made of bone.
· There isn't a fossil record of earthworms because they are soft-bodied invertebrates.
· Most earthworms will live for about six years in the wild.
· Earthworms are herbivores. Their diet consists of roots, leaves, and soil.
· There are about 2 700 species (different kinds) of earthworms around the world. Most common      earthworms are only a 7 to 8 cm long, but they can be up to 35 cm. The smallest earthworms are about 1  cm long and the largest can be 4 m long. One of the largest earthworms is the Giant Gippsland Earthworm,  found in one part of Australia. There are large earthworms in South Africa too.
· They have been found to weigh up to 11.2 g.
· Many people believe that if a worm is cut in half, the two pieces will grow into full-size worms. This is not true.
· Earthworms have been around for 120 million years. In the time of the Egyptian Pharoahs, Cleopatra said they were sacred. Aristotle called them "the intestines" of the soil. The scientist Charles Darwin studied them for 39 years in the last century!
· They are often called night crawlers because they are often seen feeding above ground at night. Said to be shy of the light, they burrow during the day and stay close to the surface, but they can dig down in the soil as deep as 2 metres.
· Earthworms are a source of food for numerous animals, like birds, rats, and toads, and are frequently used in composting and as bait in commercial and recreational fishing.
· Although native to Europe, earthworms are found throughout North America and western Asia. They do not live in deserts or regions where there is permanent frost or permanent snow and ice.
· The worm's first segment contains its mouth. As they burrow, they consume soil, extracting nutrients from decomposing organic matter like leaves and roots. Earthworms are vital to soil health and to plants growing in it because they transport nutrients and minerals from below to the surface via their waste.
· As they move through the soil, their tunnels aerate the ground. An earthworm can eat up to one third its body weight in a day. That would be equal to a 34 kg youngster eating 11 kg of food in one day!
· Earthworms move to the surface when it rains so they won't drown. They will die from exposure if the ground is too hard for them to penetrate, or if they become stranded on sidewalks or driveways.

Earthworms are underground farmers who turn the soil over like a plough. In just one acre there can be a million or more worms, eating 10 tons of leaves, stems, and dead roots a year and turning over 40 tons of soil. Imagine them all over the world -- billions and billions of earthworms, tunneling through soil, chewing up fallen leaves and animal remains, pushing heavy stones. And don't forget pooping! Their poop, called castings, contains the recycled nutrients from the debris they ate. Their tunnels add air and their poop is fertilizer. They change the dirt right under our feet!

Earthworms face possible death or mutilation every step of the way. You can only imagine what they go through every day dodging bird beaks, garden forks and stabbing fish hooks. And moles? They eat three times their weight every day. Shrews? They're even worse! They have to eat every hour. Know what one of their favorite foods is? Earthworms!! No wonder the majority of them probably don't make it much past a year! 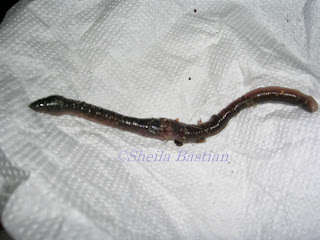 
EARTH WORM LIFE CYCLE
Earthworms are hermaphrodites. This means that each earthworm has male parts that produce sperm and female parts that produce eggs. All earthworms lay eggs. When two earthworms mate, they lie together, and cover themselves in sticky mucus, and pass sperm into each other's body. The sperm makes the eggs inside each earthworm's body grow. A thick ring of slime forms around each worm's body and as the earthworm wriggles forward, the ring with eggs inside it slips off and is left on the ground. The ring closes at both ends and becomes a hard cocoon that protects the eggs.
The eggs hatch after two weeks if the weather is warm, but they can take up to three months to hatch when it is cold. Usually one or two earthworms hatch out of each egg. The young worms are about 12 millimetres long and light pink in colour. Earthworms are able to mate when they are twelve months old.


HOW EARTHWORMS HELP SOIL AND PLANTS
Earthworms dig large burrows which let water and air into the soil. This lets the water and air get down to the roots of plants. The burrows also helps plant roots to move more easily through the soil and into new spaces. Worms drag leaves and plant bits down into the earth. As they burrow, the worms swallow soil and eat the plant matter that is in it. The soil they swallow passes though the worm's body and is left in little piles on top of the ground. This is called castings and is excellent fertiliser (food for plants). People who farm worms do it to collect the castings to sell to gardeners.

Life of an Earthworm
What's it like to be a worm? How would the world look, sound, and feel if you lived at ground level or below, if you couldn't control your body temperature or even shiver when you were cold, and if you had no arms or legs and could only wiggle to move about?

· Seeing: Earthworms have no eyes, but they do have light receptors and can tell when they are in the dark, or in the light.
· Hearing: Earthworms have no ears, but their bodies can sense the vibrations of animals moving nearby.
· Thinking and feeling: Worms have a brain that connects with nerves from their skin and muscles. Their nerves can detect light, vibrations, and even some tastes, and the muscles of their bodies make movements in response.
· Breathing: Worms breathe air in and carbon dioxide out, just like us, but they don't have lungs. They can't breathe through their mouth, and certainly can't breathe through their nose because they don't even have one! They breathe through their skin. Air dissolves on the mucus of their skin, so they MUST stay moist to breathe. If worms dry out, they suffocate. As fresh air is taken in through the skin, oxygen is drawn into the worm's circulatory system, and the worm's hearts pump the oxygenated blood to the head area. The movements of the worm's body make the blood flow back to the back end of the body, and the hearts pump the blood forward again. Carbon dioxide dissolves out of the blood back to the skin.
· Eating: Worms do not have teeth, but their mouths are muscular and strong. Nightcrawlers can even pull leaves into their burrows using their strong mouths.  Worms swallow pieces of dirt and decaying leaves, and the food passes through the pharynx, (located in body segments 1-6), theesophagus (segments 6-13), and into the crop, which stores food temporarily. The worm's stomach is very muscular, so it is called a gizzard. Like a bird's gizzard, it grinds up the food, which then moves into the intestine. The intestine extends over two-thirds of the worm's body length. In the intestine, food is broken down into usable chemicals which are absorbed into the bloodstream. Leftover soil particles and undigested organic matter pass out of the worm through the rectum and anus in the form of castings, or worm poop. Worm poop is dark, moist, soil-colored, and very rich in nutrients. That's why farmers and gardeners like to have lots of worms in their soil.
· Cleaning out the blood: Worms don't have kidneys, but they have something serving the same purpose. Worms have nephridia to filter out the dead cells and other wastes that are sloughed into the blood. Wastes from the nephridia are eliminated through the same opening as the digestive wastes. Worm urine is more dilute than ours, but has ammonia as well as urea.
· Heartbeats: Worms don't have just one heart. They have FIVE! But their hearts and circulatory system aren't as complicated as ours -- maybe because their blood doesn't have to go to so many body parts.
· Moving around: Worms have two kinds of muscles beneath their skin. The outer layer of muscles are circular muscles, which decrease the diameter but stretch the length of the earthworm's body when contracted. The inner layer of muscles are longitudinal, which shorten but widen the body when contracted. Every segment of a worm's body (except the first and last) has four pairs of tiny, stiff hair-like projections called setae.
-Segmented Body: Earthworms are classified in the phylum Annelida or Annelids. Annelida in Latin means, “little rings.” The body of the earthworm is segmented which looks like many little rings joined or fused together. The earthworm is made of about 100-150 segments. Segmentation helps the worm to be flexible and strong in its movement. If each segment moved together without being independent, the earthworm would be stationary.
- Brain: The brain is located just behind the prostomium and just forward of the pharynx or throat.
The earthworms brain does not appear to be extremely important as experiments have shown that by removal of the brain causes little behavioral change in the earthworm. There are many light sensitive cells on the upper front and rear surfaces of earthworms.

Victor Iglesias presented his project at the school Science Fair and handed in the following project that contains lots of interesting information about earthworms. 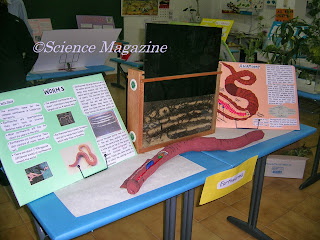 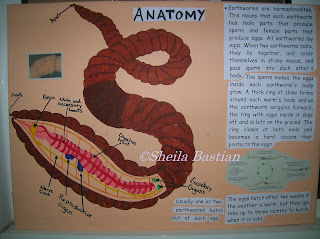 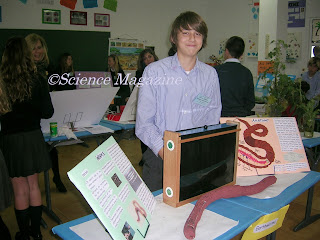 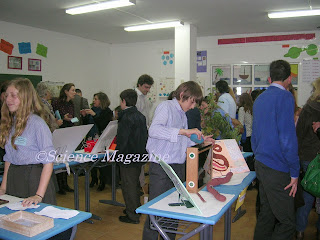 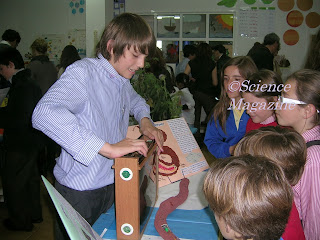