TESTING FOODS FOR STARCH AND LIPIDS BY MARIA CORDERO 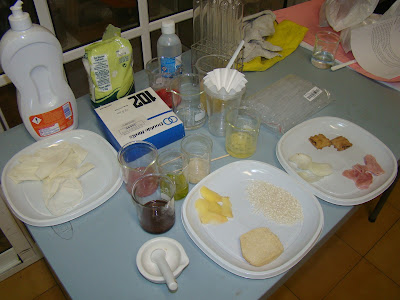 HOW TO DETECT LIPIDS IN FOODS USING ALCOHOL
What are lipids? 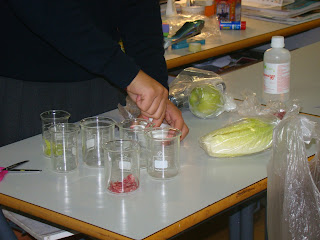 Lipids are organic biomolecules formed mainly of carbon, hydrogen and oxygen. They accumulate large amounts of energy and perform many functions in living things. They make up biological cell membranes, protect some organs, regulate body functions, in the case of sex hormones and vitamins A,D,K,E. They are excellent thermal insulators. Some are essences and others are plant pigments.

Lipids are insoluble in water but soluble in organic solvents such as alcohol. This property was used in this experiment. 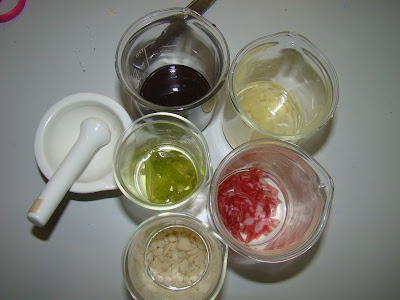 María put samples of food in different beakers and added alcohol. She let the mixture stand for a few minutes.
When this is done, a clear liquid should float on top. If the liquid is white it is that too little food or alcohol has been used. 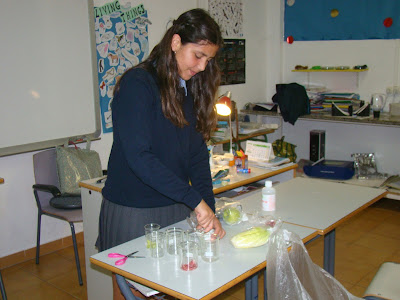 After a while she took some of this clear liquid and with the use of a pipette and put it into a test tube. Now she added a few drops of water and observed. In some test tubes the liquid remained clear and in others it became cloudy. The cloudy samples indicate the presence of lipids. The samples that remained clear indicate that the sample does not have lipids or at least not significant amounts. 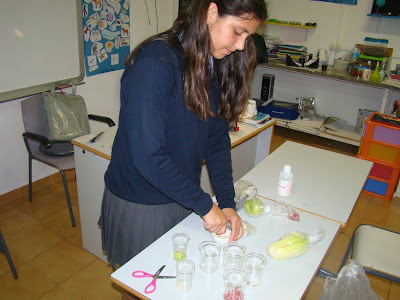 Alcohol dissolves lipids present in food samples. When water is added the liquid becomes cloudy. It is because a lipid emulsion, in which water and alcohol act as an emulsifier agent, are formed. The emulsifier causes the lipids to remain suspended in the water in the form of drops. Due to the suspension the mixture takes on a cloudy whitish appearance indicating the presence of lipids in the sample.

HOW TO DETECT STARCH IN FOOD USING IODINE.
Iodine changes colour when in contact with starch. Using a pipette María added a few drops of iodine to different food samples. The foods that contain starch, such as bread, pasta or rice, turned black or dark blue.
Starch comes from plants, it is a carbohydrate and is therefore made up of carbon, hydrogen and oxygen. It consists of a large number of glucose molecules joined together. This polysaccharide is produced by most green plants. It is the most common carbohydrate in human diets and is contained in large amounts in foods like potatoes, wheat, rice etc. 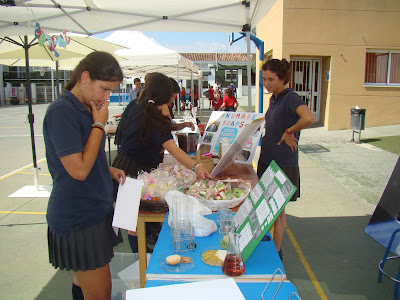 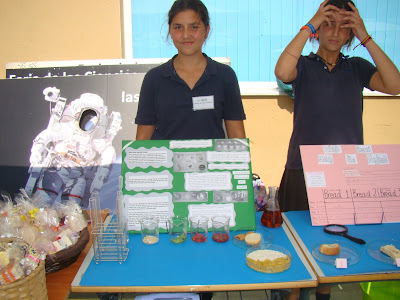 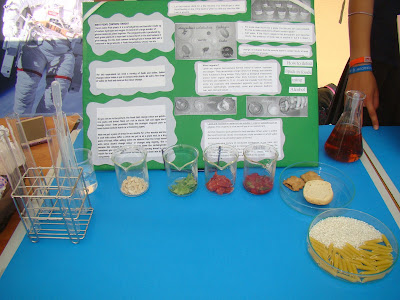 Heron's fountain is a hydraulic machine invented by the 1st century AD inventor, mathematician, and physicist Heron of Alexandria. 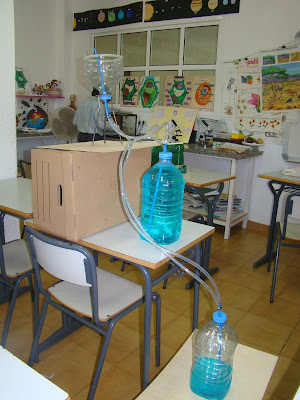 Heron studied the pressure of air and steam, described the first steam engine, and built toys that would spurt water, one of them known as Heron's fountain.
This model of Heron's foutain was made by Marta Mielgo as a project for the science fair. She used 3 plastic containers, that were 5l bottles and rubber tubes. Also silicon to airtight seal the tubes to the bottles. She stained the water with ink to obtain more visible effect of the movement of the water.

How to make it 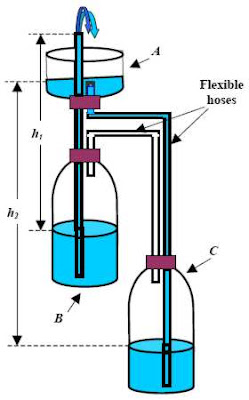 In the following description, we will call the 3 containers:


In these pictures you can see Marta building her model of Heron's fountain. 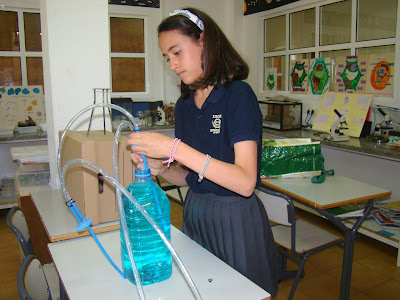 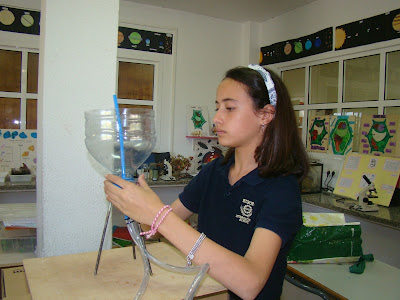 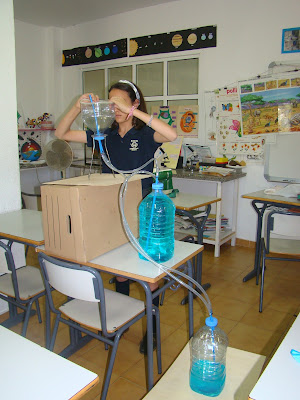 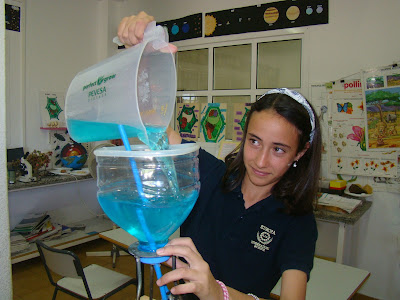 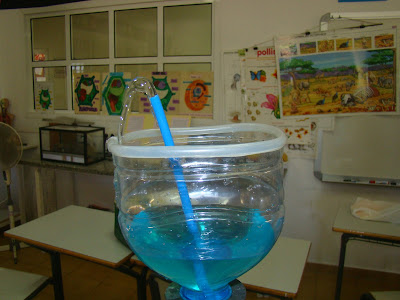 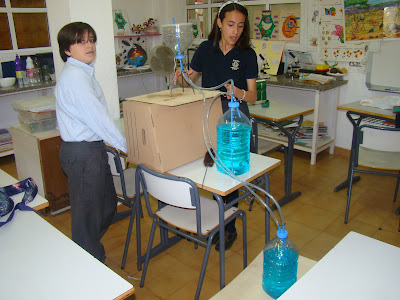 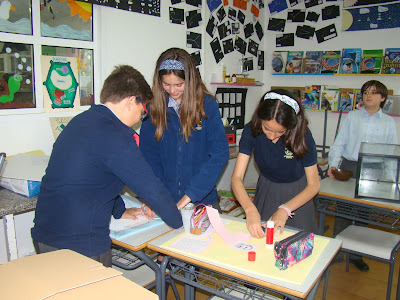 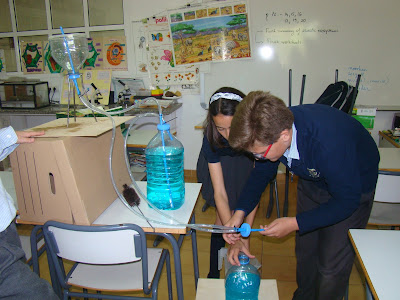 Setting up the model at the Science Fair 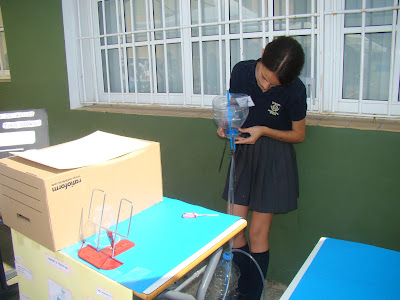 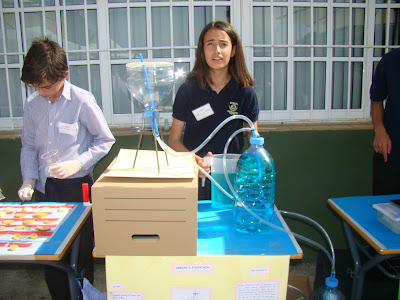 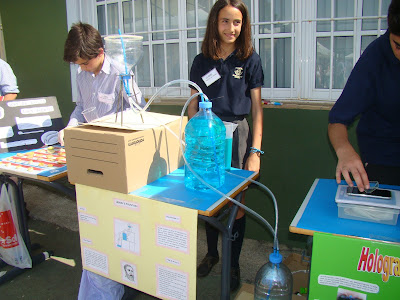 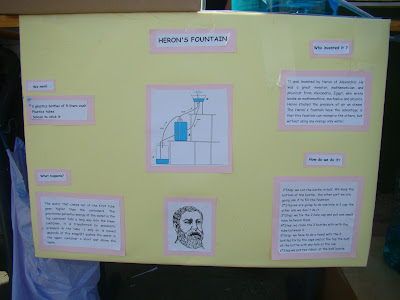 We hope you enjoyed this experiment as much as we did!
Posted by S.Bastian No comments:

Email ThisBlogThis!Share to TwitterShare to FacebookShare to Pinterest
BIOLOGY ACTIVITIES ESO 2
END OF TERM ACTIVITIES
You must do these activities well presented on white paper and hand them in before the 12th June.
1.       Identify the words in the list below as elements of the biocenosis or biotope of an ecosystem:
a) soil
b) wind
c) buildings
d) trees
e) energy
f) microorganisms
g) algae
h) temperature
i) sponges
j) humidity
k) pollution
l) dead animals
2.  Primary consumers feed on all types of plants. Where can you find most primary consumers in high mountains or in a forest? Explain your answer.
3.  Look at these pictures. Explain what biotic relations are represented in each one? Are these relations intraspecific or interspecific? 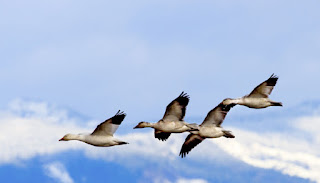 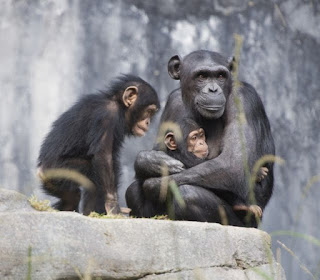 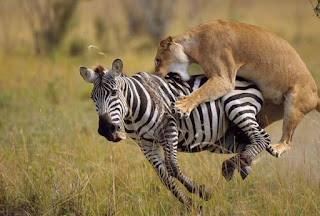 4. Which graphic representation gives more information about ecosystems: a food chain or a food web? Why do you think this is?

5. Copy and complete the table.

6.  Draw a picture of a plant cell. Label these parts:
Cell wall, cell membrane, nucleus, cytoplasm, vacuoles, chloroplasts, mitochondria
Write 5 differences between animal and plant cells.
7. Saccharomyces cerevisae  is a unicellular fungus, yeast, which is used to make bread. In the absence of oxygen, it breaks down the sugars in flour, producing alcohol (ethanol) and carbon dioxide.
a) What type of chemical reaction is taking place, anabolic or catabolic? Explain.
b) The carbon dioxide released is responsible for the sponginess of the bread. What happens to the alcohol?
8. Classify these cells as autotrophic or heterotrophic.
a) an algae cell
b) a muscle cell
c) leaf cells on an olive tree
d) root cells in a geranium
e) a skin cell
f) protozoa
c) a cyanbacteria
d) a green stem cell.

2nd TERM
- THE EARTH, A PLANET FULL OF LIFE
- THE VARIETY OF LIFE
- VERTEBRATES

1st TERM
- THE EARTH IN THE UNIVERSE
- THE WATER PLANET