MAKING AN AQUATIC AND A TERESTRIAL ECOSYSTEM

So many things happened in the class when we did this experiment! We were lucky to see many natural processes occur in front of our eyes!
To set up the ecosystems we used two plastic bottles. One, for the aquatic ecosystem and one, for the terrestrial ecosystem. We cut them both and filled the bottom bottle with gravel and water. We added gravel and soil to the top ecosystem and also some birdseeds. Once the habitats were set up each group was free to add any living thing they could find and bring. By doing this all sorts of things happened before are eyes!

Here are some pictures of how we set up the habitats. Birdseeds grow very fast and they made a quick plant environment for the animals.

One group added some larvae that they found growing on the potato plants of another experiment we had in the class. Shortly after, the larva changed into a pupa and formed a cocoon in a corner of the bottle and began metamorphosis, After some time we were able to see the pupa change into a moth. In the following photos you can see how it transforms!


A spider that was also in the same ecosystem placed itself next to the cocoon and stayed there for several days. We thought it was probably waiting for the adult to emerge from the cocoon and to trap it as soon as possible. It also made a web over the cocoon! So we didn’t just see the larva changing into a pupa, we saw also saw a spider weaving its web! 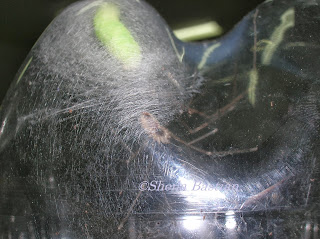 The larvae made cocoons in other parts of the ecosystem. In this picture you can see how it has bent a leaf for protection.

We also found a cocoon out of our ecosystems!!! Here is one on the classroom curtains …this is wildlife in the class!!
Look at the following photographs and observe the transformation. We were able to see metamorphosis! 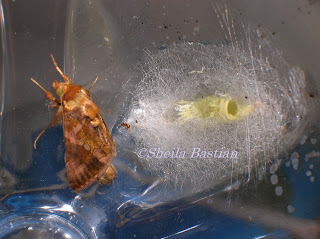 Another metamorphic process that occurred was the transformation of mosquito larvae into mosquitoes. One of the groups of students brought many mosquito larvae from an abandoned swimming pool and they added them to the bottom floor of their experiment. Many students were surprised to see that mosquitoes emerge form the water! This is because their larvae are aquatic. Many students had seen these larvae before but didn’t know they were mosquito larvae!

We were able to see perfectly how the larvae left the water as adult mosquitoes. There were so many in the bottle that every day we had to set some free.

Another natural event that took place in one of the ecosystems was performed by a beetle. This animal destroyed all the plants in the top floor and rolled them into a big ball. The beetle covered itself with it. Some beetles feed on this matter when it begins to decay. The students of this group were very surprised to see how their terrestrial ecosystem had disappeared in a day!! Here you can see the big ball of plants and soil surrounding the beetle.

In the following pictures you can see different living things in the ecosystems. Snails, geckoes, grasshoppers, worms, flies, fish etc. 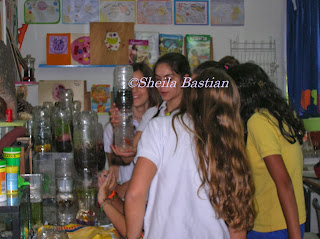 The students thoroughly enjoyed this experiment!!

My daughter's class has done this....and now I have a leaky ecosystem running tables, shelves, carpet....so is there a way to transplant it and use something more stable than plastic bottles? Could this be moved into a aquarium or fishbowl? Has anyone tried something other than bottles?

If done properly, this experiment shouldn't leak. Plastic bottles are easy to cut and handle. Be aware to fit the top of the terrestrial ecosystem inside the bottle and not outside. Plants transpire water, the water condenses when it touches the plastic bottle. The water drips down the sides of the bottle, the idea is that it drips back into the soil to water the plants again. If the top is fitted on the outside of the bottle the water is going to drip out and your going to have a leaky experiment!...I can't thing of any other reason it would leak. I always tell my students to make sure the top is correctly fitted and have never had any problems.